What is Kodokan Judo?

Judo is judo, right? Does it really matter who you follow?

The Origins of Kodokan Judo

Kodokan Judo traces it’s origin to the Founder of Judo, Kano Jigoro Sensei, who, in 1882, combined the teachings of his JuJitsu Masters, Fukuda Hachinosuke (Tenshin Shinyo), Iso Masatomo (Tenshin Shinyo) & Tsunetoshi Ikubo (Kito Ryu), and galvanized the essential elements of each into a cohesive, educative and formidable martial arts practice. Through the lessons undertaken with these preeminent teachers, Kano had discovered that each specialised in differing disciplines. The Tenshin Shinyo schools tended towards Atemei Waza (striking techniques) & Katame Waza (grappling techniques), where the Kito Ryu favoured Nage Waza (throwing techniques).

The genius of Kano was the ability to discern the fundamental principles of each, and apply to them a unify theory, and to produce a stronger, more coherent and effective martial art system. He took this new form of JuJitsu and named it Judo, which translates literally in English to The Gentle Way, yet is closer in translation to The Way of Yielding. To the uninitiated, this may seem weak, that you yield to a threat. To the Judoka however, this yielding is the prelude to placing your opponent exactly where they do not wish to be, then implementing a technique (waza) that completely neutralises their attack.

At the heart (kokoro) of Kodokan Judo is the founder’s belief in the universality of Judo, a belief that the purpose of Judo is to develop strong bodies & minds in humanity, and from this we would all prosper. From this Kano Jigoro Sensei developed the terms Maximum Efficiency and Mutual Benefit & Welfare.

The Origins of Australian Kodokan Judo 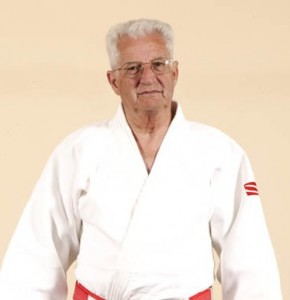 The Australian Kodokan Judo Association was founded in 1981 by Mr Ivan Zavetchanos, surely one of Australian Judo’s most illustrious icons whose curriculum vitae is too lengthy to do justice to here. By way of introduction, he was, amongst many other things, a co–Founder of the Judo Federation of Australia 1951, a member of the Australian Olympic Committee, one of 17 founding members of International Judo Federation in 1952, founder of Oceania Judo Union 1954, Australian Open Champion 1954 & 1955, President J.F.A. 1958–1969, President O.J.U. 1958–1979, Vice–President I.J.F. 1958–1979, Australian Olympic team manager/coach Tokyo , 1964, National, Continental and International Judo Referee, and promoted to 8th Dan in 2001.

The Kodokan Association’s principal charter is to preserve the original doctrines of Judo, as espoused by Judo’s founder Dr Jigoro Kano. The Association’s chosen name of “Kodokan” is a reference or salutation to the birth place of judo, the original dojo or place of learning which, from its humble beginnings in a Japanese temple in 1882, stands today in the heart of modern Tokyo as a virtual mecca for judokas from all over the world.

One Path, Many Ways

It is critical to understand from the outset that neither Australian Kodokan Judo Association (AKJA), nor the Australian Judo Federation (JFA) nor the Judo for the Disabled Association (JDA) are opposing forces, nor do they represent different “styles” of judo. Reciprocal arrangements and recognition, training curriculii and tournaments open to judokas from all these organisations are becoming commonplace in some States and undergoing constant efforts to nurture the common purpose they share – the development of judo as a mainstream activity accessible to all.

Access to the Olympics for young athletes is administered by the JFA who are the designated body to liaise with the Australian Olympic Committee, whilst at a local club level when Olympic matters are not so relevant, all the necessary accreditations, insurances and training curriculii can be provided for by affiliation with the AKJA alone.

Notwithstanding the great importance of Olympic level judo, the reality is that the vast majority of players will never be Olympians and possibly have no ambition to become one. The heart and soul of Judo, in the opinion of the Australian Kodokan Judo Association, is in mainstream grassroots judo clubs across the country who cater to juniors, young adults, senior players and veterans who support and applaud the sporting and competitive facets of judo but do it themselves as a complete personal development system possibly for the whole of their lives, not just as young Olympic hopefuls or elite athletes.

To this end, the AKJA’s resources are devoted to the development of judo in its entirety, with no special emphasis on the elite or the political desirability of developing international competitors.

“Judo is the means of understanding the way to make the most effective use of both physical and spiritual power and strength. By devoted practice and rigid discipline, in an effort to obtain perfection in attacking and defending, it refines the body and soul and helps instill the spiritual essence in judo into every part of one’s very being. In this way, it is possible to perfect oneself and contribute something worthwhile to the world.” – Jigoro Kano, Founder of Judo.

We encourage you to browse our growing library of articles/links covering every conceivable aspect of judo, its techniques, philosophy, history, etiquette, cultural roots, its status as both an Olympic sport and traditional martial art, its unique and fortunate position in the martial arts world in being free from the chaos of apparently competing “styles”, its beginnings from the creative genius of just one universally recognised founder, Dr Jigoro Kano and perhaps most importantly, the enormously enriching journey it can offer to you.